Was The Manchester Arena Bomb Pre-Planted, Pre-Recorded Or Fake | No Crowd Exposes Lies Does this report from CBS News about the alleged Manchester suicide bombing line up to a pre-planted bomb theory?, why do the attacks always have to be suicide bombings? Simple answer is, this narrative pretty much closes the case.

If a bomb was detonated on a timer, why would it be a suicide vest or bag, this is just a bomb, probably pre-planted before the attacks leaving huge holes in the Salaman Abedi story being pushed in our faces.

When I looked at the Domodovo international airport in Moscow, in 2011, after a so called suicide bombing, slowing the footage down revealed the bomb was in-fact in the ceiling and therefore was pre-planted meaning the suspects they say carried out the attacks were a complete lie carried out by not only the Russian media but also the government intelligence agencies and the justice system, could I be forgiven for suggesting our scheming government and news outlets could possibly do the same and not tell us? It seems every time there is an election looming we have chaos, who is really behind it all? #AnswersOnaPostcard.

Here is the video which I uploaded to my YouTube channel on March 22, 2016, after it was mistaken by mainstream news outlets as footage from the Brussels bombings, it soon came to light that the footage was five years old from a suicide bombing in Moscow’s Domodovo international, Russia’s busiest airport.

The main finding in this video was a shock as it clearly proves the bomb was not delivered or detonated by a suicide bomber, it was planted in the ceiling of the airport and this was very easily confirmed by myself after slowing the footage down and going over it frame by frame, analysing the structure of the room, the blast direction and the reaction of people caught up in the explosion.

Remembering this was in Russia in 2011, let’s take a look at the images we seen from Belgium on March 22, 2016, these also looked like there was a lot of down-force on the ceiling panels, use your own critical thinking to process what you are seeing and not what you have been told to see and think. Here we can see how easy it is to act out one of these events and portray them to the public as you wish, this was a mock terror attack drill held in Manchester’s Trafford Centre, in May 2016, it featured crisis actors and members of the emergency services and armed police acting out a terror event which is described as “frighteningly realistic” by the narrator. 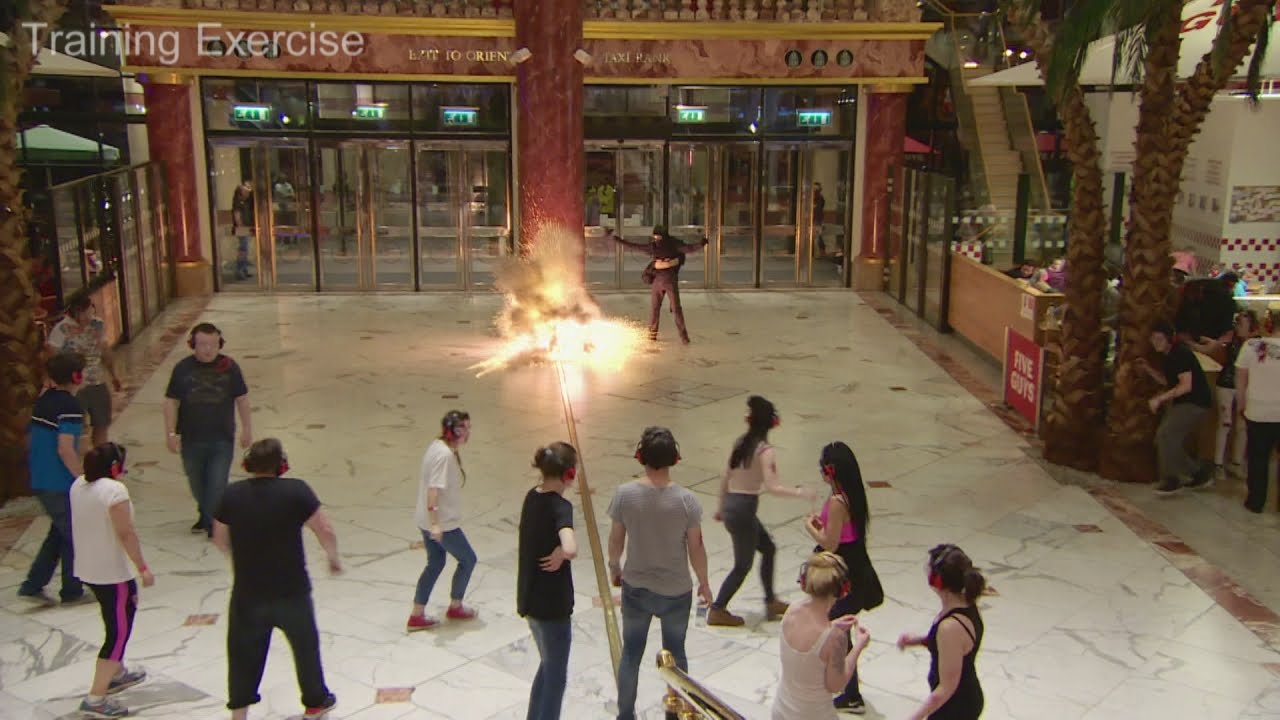 Just a couple of weeks later we seen the Old Trafford Bomb hoax evacuation, again this was in May 2016, they tried to cause the same carnage until the plot was foiled by a member of the public who found a pipe bomb in the toilets of the largest domestic football stadium in the United Kingdom with a capacity of 75,643, this was the perfect place to either carry out an attack, or run an evacuation test a year before the Manchester Arena bombings in May 2017.

This is worth bringing up as the explanation was a local security firm had been training bomb sniffer dogs in the stadium and they had left a mock bomb behind, surely a huge regulatory error but nothing much more was said about it.

Another key point is, nobody knew about the sniffer dog drill until the evacuation of the football ground, but who would of known about a possible drill being recorded at the Manchester Arena prior to the attack date, because as we see in footage of the blast area, there is not the 119 injured and 22 dead people in the area, the numbers do not add up, we do not hear any of the screaming people rushing out of the concert, we seem to be looking at video taken at a different time to the suggested bombings on May 22nd.

During the BBC News and Sky News footage, we heard a witness call in and say they had been stopped from travelling down a corridor by arena staff, they turned back and the sound of the bomb went off, does this elude to the fact they had a sealed off area where they performed this hoax and filmed it maybe?