Born in Southeast London, Kate grew up in a family immersed in music, art and literature. She learned to play violin at age 11 but didn’t like it; she began to set her poems to her own chord formulations

The first strange point worth picking up on was the appearance on the album of Rolf Harris, whose career as a popular entertainer was ended by his conviction and imprisonment for sexual offences.[7] In 2014, at the age of 84, he was jailed on twelve counts of indecent assault that took place between 1968 or 1969 and 1986, on four female victims aged between eight and nineteen.

He had a part in vocals and instruments on a track called an Architect’s dream which you can see in the video below.

Despite campaigns from fans who pressured her in 2014 to wipe him off the music, she still has not fully disassociated from Harris with the part he played in the song, and its follow up, which also appeared on the same album, the track was called the painters link.

After hearing a creepy intro from Rolf Harris we see a butterfly after 22 seconds. During 2016 I have made many posts concerning monarch mind control programming which the elite symbolise with a monarch butterfly due to the butterfly’s ability to pass knowledge on through DNA. 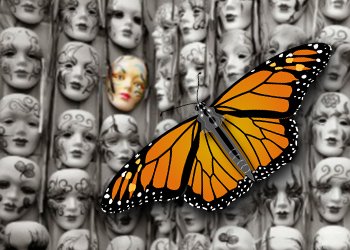 Monarch Programming is a method of mind control used by numerous organizations for covert purposes. It is a continuation of project MK-ULTRA, a mind-control program developed by the CIA, and tested on the military  and civilians. The methods are astonishingly sadistic (its entire purpose is to traumatize the victim)  and  the expected results are horrifying: The creation of a mind-controlled slave who can be triggered at anytime to perform any action required by the handler.  While mass media ignores this issue, over 2 million Americans have gone through the horrors of this program. This article looks at the origins of Monarch programming and some of its methods and symbolism.

Watching the painter painting
And all the time, the light is changing
And he keeps painting
That bit there, it was an accident
But he’s so pleased
It’s the best mistake, he could make
And it’s my favourite piece
It’s just great

The flick of a wrist
Twisting down to the hips
So the lovers begin, with a kiss
In a tryst
It’s just a smudge
But what it becomes
In his hands…
Curving and sweeping
Rising and reaching
I could feel what he was feeling
Lines like these have got to be
An architect’s dream

Information about Kate Bush becomes more cryptic the more I dig, we seen earlier her 58-58 connection, we remember Prince was born in 1958 and would of been 58 this year had he not been sacrificed.

This has got to be one of the earliest internet forums found, it relates to the death of the mother of Kate Bush, Hannah.

Her mother died on Lupercalia which is February, 14,  in 1992, after Terry Wogan had wished her well soon on the 18th December, 1991 as Kate Appeared on a show hosted by Wogan.