Welcome to #Pizzagate.  In 2016, the largest pedophile ring ever discovered was exposed by the FBI shortly after Anthony Weiner’s laptop was seized.  Mainstream media hardly spoke of it and even covered it up.  CNN would rather publish real news, such as Donald Trump eating KFC with a fork.  We are here to do their jobs.  Pizzagate is a joint investigation between citizens and law enforcement to expose child sex trafficking around the world. Whilst having a look at a pizza bar in Liverpool city centre called Maguire’s Pizza, I noticed a few odd connections to the findings made by citizen investigations regarding pizza parlours which the owners of the bar may or may not know about, so here I will point a few of them out just incase.

About
We are a bar selling boss pizza with a sneaky little back room for gigs and shows. We also love wrestling and show classic PPVs every Sunday.
categories
Pizza Place · Bar

Straight away the first thing which grabbed my attention was the profile picture used by Maguire’s Pizza Facebook page.

The M looks highly masonic to me as I have even seen this same design without the pizza on a building during my Masonic Liverpool documentary.

The symbol “M” is actually that of Mountains which were called by the Ancients breasts. This picture was posted by the page today, February, 9,2017.

I clicked the image and it was posted with a caption which reads:

It’s national pizza day so come get a pizza this.#puns
What is #Pun? what is the meaning of a pun?
verb

Was this just another mockery of how certain codes are hidden, a pun?

To match the masonic logo as soon as you walk in the place you are greeted by a clear masonic floor, is this place owned by freemasons?  Look for yourself. 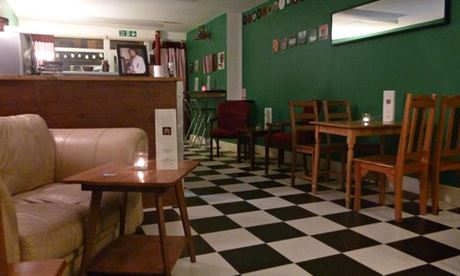 Another angle with this M beaming around the place as a part of the live entertainment lighting, how many people who go there will understand what this all symbolises? 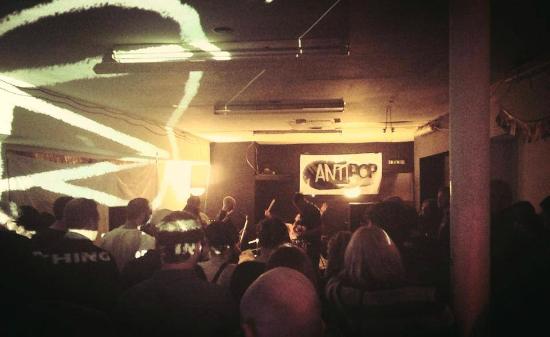 This pizza picture has emphasis on the masonic floor also, truth hidden in plain sight. Pictures from the City of Liverpool Freemasons where we have 27 Lodges and 19 Chapters within the Liverpool Group. Friday meal deal. Get your eyes around this info, then your mouths around our… pizza.
Next we see this small Liverpool pizza shop hosting bands from as far as California. We know if we if we look into the Crowhurst we will probably see some weird satanic references so here is an image taken from the bands Facebook page, notice the support bands, Dr Richard Killman, and Ritual Object etc…. Here is another pic from Maguire’s Pizza. Someone who the owners seem to look up to very much. Andrew Fetterly Wilkes-Krier, better known by his stage name Andrew W.K., is an American singer-songwriter, multi-instrumentalist, entertainer, motivational speaker, and music producer. Wikipedia
Andrew appeared as one of the 77 drummers in the 77 Boadrum concert held at the Empire-Fulton Ferry State Park in Brooklyn, New York

Andrew W.K.
There are lots of stories out there about this guy that Andrew and his “team” had apparently worked very hard to cover-up, ignore, or spin in some more flattering way. Not only do some people think he’s part of the Illuminati, but some think that he was actually created by an organization such as the Scientologists or even just plain Satanists.

Andrew W.K. is a creation!  He’s a corporate creation! He’s a big publicity stunt promoting certain ideas about life that other people might not want the public to know about. He is a Scientologist and quite possibly a Mason.  He’s worked with a lot of the same industry executives as Lady Gaga, who many people think is the later effort by the same team to make a female version of Andrew W.K.