The Beast From The East did it’s best to create mass hysteria in the UK this week with Storm Emma following as temperatures dropped further and winds picked up as snow fell again over night.

Cold conditions brought black ice warnings early Saturday morning but we have a new unreported problem sweeping the nation with a mystery fall in air quality levels over a matter of hours placing most of the country in the UNHEALTHY air quality category.

After checking the Air Quality page on Enchanted LifePath Alternative News & Media website, concerns were raised with a reading of 104 in Liverpool meaning unhealthy to sensitive groups. The rest of the UK shows even more dangerous levels classed as UNHEALTHY with London one of the areas most at risk.

We must ask the question of what is in that fog? Members of the public should wonder why it goes unreported by local press every time we have poor air quality days which carry health implications for most of the population. Again I have to question why I am the one person in the whole of the UK reporting this.

Is it just traffic and industry fumes being caught in the winds to create a white smog?

Each time we have an event like this I notice I have stinging eyes and a burning on my lips and tongue. I relate the sensation to that of battery acid when that comes into contact with your mouth. This is a symptom I have had on many occasions but I have never said it when I have been reporting on these events because I did not want people to think I am just saying it because of the index readings. 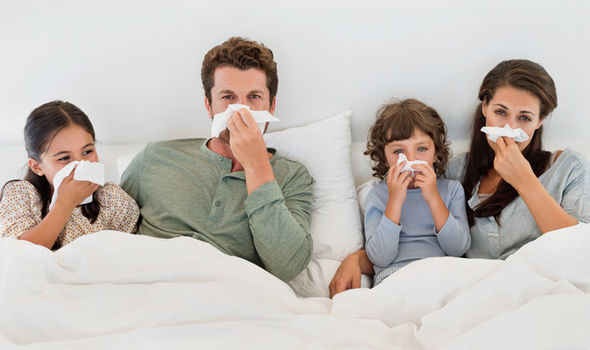 Another common theme with these bad air days is that they seem to be followed by the new mega-colds which people suffer from. Each article or report I have made has been directly followed by people suffering flu-like symptoms and colds which last any time up to five weeks after bad air days. I suspect this is when they contracted an illness which manifests after an incubation period.

Has bad air quality coincided with a surge in Flu-Jab vaccines being handed out to patients suffering prolonged respiratory issues?

This chart shows you the warnings that each reading carries and the steps you should take for yourself, the elderly and young children in your region during an air quality drop.

London’s current readings come with warnings to active children and adults with respiratory disease such as asthma to avoid prolonged outdoor exertion.

The next level alerts state the whole nation is likely to be affected, this is an event which I have documented once before with readings in Liverpool and other parts of the UK going above 300.

Before I have published this article the reading from Liverpool has dropped again as it now shows 116.

You can click some images on this page to be directed to the information source to verify the report. The North West is also suffering from rising bad air quality problems with Warrington and Wigan showing a sharp decrease on Saturday.

Keep track of the air quality in Liverpool and click the links to track other cities in the UK and Europe from the UK Air Quality Index web site or here on Enchanted LifePath where you can also check health warnings applied to the each reading.. This post will be updated throughout the day.

This is the current map of Europe. Are you having a bad air day? If so please share this article with the buttons below and be sure to add #BadAirDay